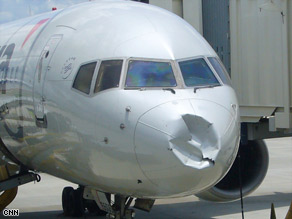 orthwest Airlines is investigating why the nose cone on one of its planes caved in on a flight Sunday from Detroit, Michigan, to Tampa, Florida, a spokeswoman said Sunday.

Baur, who called the damage a "minor maintenance issue" and a "very rare occurrence" said all 182 passengers on board arrived in Tampa safely.
Pictures sold to CNN by a passenger awaiting the plane's next leg, to Minneapolis-Saint Paul, Minnesota, show the nose cone bashed in. Instead of continuing on, the plane was towed away, said the passenger, who was still waiting for a plane five hours later.
Airplanes usually kill you quickly - a woman takes her time.
Top
Post Reply
1 post • Page 1 of 1